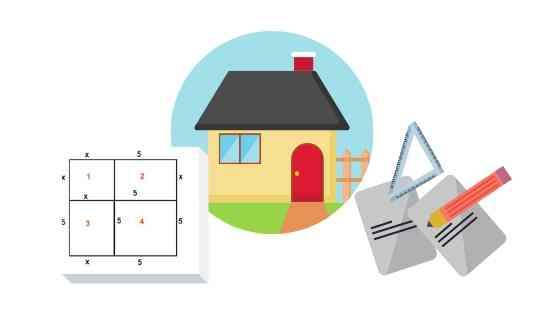 Completing a square geometrically is one of the...

Quadratic equations in their algebraic form, as we know them today, were first discovered by a Persian scholar, Al-Khwarizmi. While he was not calling them ‘quadratic equations’, they were based on the dimensions of a square and eventually borrowed the Latin name of the shape “quadratum”.

Al-Khwarizmi was able to solve quadratic equations using a method we now know as completing a square.

The Problem of Two Rooms

In the ancient times, people who were involved in construction and dividing land required some mathematical tools to solve challenging problems they were encountering.

One of the problems which Al-Khwarizmi managed to solve by combining Geometry and Algebra was related to building an accommodation consisting of two rooms.

At the time of Al-Khwarizmi there were no mathematical formulas to solve this kind of problem, so he decided to try to divide the 2nd room into two parts and arrange them differently as shown below:

This resulted in the following combination of three figures:

Then, the rectangles were shifted and combined together in the following formation:

When Al-Khwarizmi looked closely at the rearranged formation, he thought:

“What if I add one more shape at the right-bottom position, which will definitely be another square?”

So, the whole area of square #1, the rectangle #2 and rectangle #3 is equal to 39 m² as we evaluated in the beginning.

The area of the whole shape (large complete square) is equal to:

Let’s find x from the equation (where x > 0, since this is a side length):

Therefore, the side length of the first room is 3 m.

So, using geometry, logic and the newly discovered algebraic symbols, Al-Khwarizmi could solve one of the most challenging problems of his time.

Completing a square geometrically is still used to this day to visually demonstrate the process and explain why it is even called “completing a square” – well, because we literally complete the square by adding a missing square piece to an existing quadratic geometric formation.

In modern mathematics, though, an algebraic method is mostly used to solve problems like the one above, as well as problems involving any maximum or minimum quantities – converting the standard form of a quadratic equation into its vertex form. The vertex form of a quadratic equation provides the max/min value, as well as the value at which max/min value occurs.

A football is kicked into the air. Its height h, in meters, after t seconds is given by theequation

When does the ball reach its maximum height?

Therefore, from the resulting equation we can conclude the maximum height reached by the ball was 31.625 meters and it was reached after 2.5 seconds.