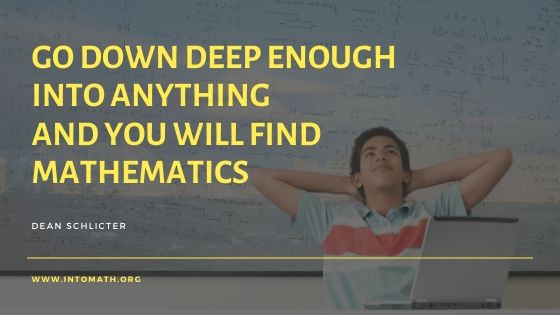 Math is an ancient and fundamental discipline, which has been studied and developed for ages. Here are 30 powerful math quotes from famous people from centuries ago to modern times.

“Pure mathematics is, in its way, the poetry of logical ideas.” -Albert Einstein

“Do not worry too much about your difficulties in mathematics, I can assure you that mine are still greater.” -Albert Einstein

“There should be no such thing as boring mathematics.” -Edsger Dijkstra

“No employment can be managed without arithmetic, no mechanical invention without geometry.” -Benjamin Franklin

“Truth is ever to be found in the simplicity, and not in the multiplicity and confusion of things.” -Isaac Newton

“With me, everything turns into mathematics.”-Rene Descartes

“We often hear that mathematics consists mainly of “proving theorems.” Is a writer’s job mainly that of “writing sentences?” -Gian-Carlo Rota

“The only way to learn mathematics is to do mathematics.” -Paul Halmos

“Arithmetic is being able to count up to twenty without taking off your shoes.” – Mickey Mouse

“If equations are trains threading the landscape of numbers, then no train stops at pi.” -Richard Preston

“Simple laws can very well describe complex structures. The miracle is not the complexity of our world, but the simplicity of the equations describing that complexity.” -Sander Bais

“ “Obvious” is the most dangerous word in mathematics” -E.T. Bell

“The essence of mathematics lies in its freedom” -Georg Cantor

“The enchanting charms of this sublime science reveal only to those who have the courage to go deeply into it.” -Carl Friedrich Gauss

“A mathematical theory is not considered complete until you have made it so simple that you can explain it to the first man whom you meet on the street.” -David Hilbert

“There is geometry in the humming of the strings and there is music in the spacing of the spheres.” -Pythagoras

“Let’s face it; math is not easy, but that’s what makes it so rewarding when you conquer a problem, and reach new heights of understanding.” -Danica McKellar

“Math, it’s a puzzle to me. I love figuring out puzzles.” -Maya Lin

“I think math is a hugely creative field, because there are some very well-defined operations that you have to work within. You are, in a sense, straight-jacketed by the rules of mathematics. But within that constrained environment, it’s up to you what you do with the symbols.” -Brian Greene

“It has become almost a cliché to remark that nobody boasts of ignorance of literature, but it is socially acceptable to boast ignorance of science and proudly claim incompetence in mathematics.” -Richard Dawkins

“As for everything else, so for a mathematical theory: beauty can be perceived but not explained.” -Arthur Cayley

“Mathematical knowledge adds vigour to the mind, frees it from prejudice, credulity, and superstition.” -John Arbuthnot