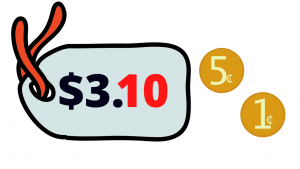 In this lesson you will learn about money: dollars and cents.

The word “dollar” is rather old and is a modified version of the word “thaler”. Thaler is what coins were called back in 1519 in Chech Republic. Later on, the English version of the name (dollar) was also applied to similar coins. Not only ones minted in central Europe but also the Spanish or Portuguese money. The Spanish peso or dollar were widely used in Britain’s North American colonies because of a shortage of official British coins. So, after the United States became independent, “dollar” was chosen as the name of its currency instead of keeping the British pound. There are many different theories regarding the origin of the symbol used to represent a dollar ($). 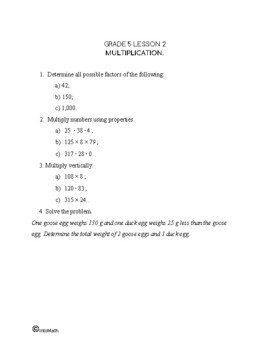 What you will learn

You will discover that 1 dollar equals 100 cents and that cents can be expressed as part of a dollar using fractions or decimals ($0.05 = 5 cents).

The lesson teaches how to group the digits based on their place value in order to do operations with money faster and without a calculator.

It also discusses sales tax and how to calculate it when making a purchase in order to find the grand total. A sales tax is what a customer pays on top of the actual price of the item. In some countries it is included in the price right away, in others it need to be calculated and added at the check out.

Video Lesson In this Grade 5 lesson you will learn...

Video Lesson Division is  the opposite operation ...